Not so good conclusions: In case of a particular problem with one tube of a pair or quad, the normal reaction is, to l try this tube in other sockets. This is a logical reaction. Sometimes it can be observed, the issue occurs with one tube of a quad only. Then, the conclusion: it must be the tube, is not far away. This may be right, and it may be wrong. It can happen, that three tubes of a quad will forgive an amplifier problem, and one tube will not. There is no 'must' for a tube, to forgive amplifier problems. We have to look into this further:

There is a hidden expectation, if a brand-A forgives an amplifier problem, and brand-B will not, in such a case, 'B' has better quality. Definition of quality certainly is not described as the ability to withstand abuse. Much to the contrary! High lifetime is only reached under the intended use conditions. Like in human life, a person with the genetic ability to get very old, is not characterized by feeling fine when he is smoking and drinking. Even so, if he continues to do so, he may not get old at all. Yet when living healthy, he might get much older than other people.

Regard the tube datasheet a fact sheet, and not just an advise. In some cases an amplifier can have extremely high in-rush current during switch on, like four times average current can happen. In-rush current with a cold tube should be minimized. There are ways for that. specially with KT88 it can happen in such a case that a develops a spark inside. If that happens, of course, the experiment is repeated by the owner great many times. It will be always that one particular tube, and it is plugged into all the sockets, to see what happens. If he has more amplifiers than one, the tube will even be passed around all amplifiers as well, to see what happens. Of course the problem 'follows the tube', but it may well be you are step by step destroying a good tube. After 50 or so times, this tube has lost some emission, and in addition develops a risk to short the grid to the cathode. The loss of emission, in a push pull stage (typical for KT88) will now cause over load of the other tube of the pair. So after a while it will also have lower emission. Latest by now, the owner gets upset, puts back in the old tubes (that worked fine always) and will refuse to accept his own behavior as a mistake. Perhaps even so, you need to read back this paragraph again, because you also did not recognize the mistake. This becomes more difficult as the amplifier manufacturers will never admit a failure with his design.

With this we mean two things: The schematic, and the instructions on how to exchange tubes. Both items are usually kept secret. This is bad service to your customers. Even so this is illegal by European laws. A company is obliged to hand out any any information and supply special tools needed to repair the products. Moreover this information and tools may not be over priced. That is the law here! Car manufacturers indeed offer schematics of the electric systems. Not for free, but you can get it. Same for special tools. Some when the repair manual says, remove this part with that special tool nr 123-222 they must supply that tool, at a realistic price. I think it is only good, such laws exist.

It needs little understanding, the schematic is one of those things.

Please believe me, there was no new schematic invented since the OTL by Julius Futterman in 1942. There are no spies everywhere, who do not really know how to build a good tube amplifier. As if they would be anxiously waiting until a good company publishes their schematics, finally knowing what to copy. Really this argument is so silly. It is silly of a professional company because they should know themselves all schematics have already been invented before. They should know this because they are professional. It is also silly of an unprofessional company assuming the whole world is trying to spy out on their greatest new schematic inventions, which in fact nobody needs.

However, when I look into a problem in great detail, the situation reverses most of the time, and we find a failure often in the schematic. Then again, we have the discussion like, 'we are doing this since 25 years... and we never had a problem'. However, it is a fact, when the 5U4G rectifier datasheet says, the maximum capacitor is 47uF, you should not use a higher value.

When we suspect an error with the amplifier design, specially then, we get send no schematics.

A good diagnosis requires experience. Not tube rolling. My honest judgement is, that with amplifier tubes 50% of the tube problems could have EASILY been avoided by better amplifier design, the other 50% less easily, and there is no such thing as an unavoidable problem.

I think manufacturers should make it not so easy for users to do stupid things.

With rectifier tubes that problem percentage is high. Reason is, rectifier tubes schematics are so easy, but choosing the right values is so hard. Yet even with wrong values it initially works. Even when a mistake is obvious, like using a capacitor that is not allowed by the datasheet, even when pointed out, simply continue making the product that way. I would say in 90% of the cases this is so!

Another risk cause, is mixing tube electronics with semiconductor electronics. Though this is possible, such products were never a break through.

When replacing tubes in such an amplifier, it may damage the new tubes if there is an adjustment procedure for the amplifier, and you don't use this.

To find out if there is a procedure, only ask the manufacturer, and nobody else. If such a procedure exists, and you fail to use it, destruction of the new tubes can result. The tubes can short circuit with a bright blue or white spark from the inside, with or without speaker damage. Even so, not all amplifiers are short circuit proof, and need a repair afterwards.

If the amplifier has hand control of the bias, for each tube, we sometimes see the following mistake is made:

MISTAKE: The user replaces all tubes, switches the amplifier on, and starts to adjust the tubes one by one. When such an amplifier has 6 or even more tubes per channel, you may be too slow adjusting, and one of the tubes will damage before you have a change to adjust it. So at least, you need to set the bias for the tubes to a lower value, before you begin, and use the old tubes for this, to see how it works. Some amplifiers can damage when you set all regulators to minimum, because the internal voltage may become too high. So this is no advice on how to to the settings.

GOOD ADVICE: Please get the official service procedure from the manufacturer, and do not experiment without it. Be cautious when the procedure is secret. Really an amplifier can be made such that you can exchange tubes yourself, but this seems not always wanted. So any amplifier with a secret schematic, and a secret procedure to exchange tubes, we advise you not to buy such an item.

It is amazing, and sometimes shocking, to see how private people but just as well very well known companies, throw advice of tube manufacturers in the wind. The most common mistake is invent some self-made stories, about why heater voltage is not so important. Whereas every SINGLE percent deviation will impair lifetime a lot. Also some theories about over heating or under heating, this is for the birds, I do not even read it.

The problem is, tube heaters can take maximum 5% voltage tolerance. So your good old 220V apparatus, at 243 Volts is overheated by 10% which makes it a real tube destructor. Better set it to 240Volts at the back. If it is too old, and doesn't have that option, buy an adapter transformer from 240 to 220V. Or, exchange tubes 2...3x more often. (Yes that much). These are the only options.

These have the same problem, when the heating is unstabilized.

the best way is really to have electronically stabilized heaters inside the amplifier. The episode where everybody was shouting that AC heated tubes sound 'better' is forgotten now. Instead of that we hear now similar shouting that 'Current source' heating sounds better. But I wonder what is the sound of a current source like. Main thing is, you keep the heater VOLTAGE constant, regardless the mains voltage. 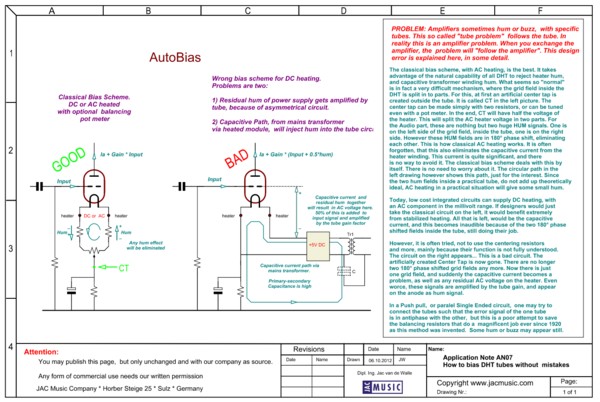 this page is also linked from the Emission Labs factory page, and in that case we only refer to such amplifiers that can use the Emission Labs tubes, like 2A3 and 300B, etc. For other cases, this page also gives information about other tubes than Emission Labs, like KT88, 6550, etc. 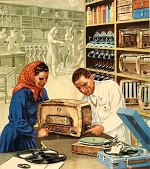 ..... Satisfaction is most often based on a simple criterion, explained as follows:

'Some years ago, I bought an amplifier, it is good because it works well'

'The amplifier I bought is not good, because it always fails.'

The above is from the view of the amplifier manufacturer Verdier.

From the view of the tube manufacturer, we can change the text as follows:

'Some years ago, we bought tubes, they are good and work well.

'The tubes we bought, were not good, because they failed.